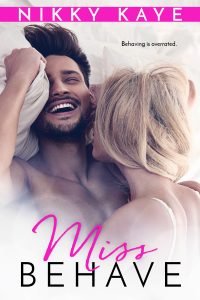 As pick-up lines went, it was pretty effective. If he flashed that smirk at me one more time… oh, no. I was a journalist, a professional. I could resist the panty-melting smile.

I folded my arms over my chest and jutted my hip out, planting my feet squarely on the industrial carpet. “I’m sorry?”

His gaze went down my body. I didn’t mind as much as I ought to. My traitorous nipples hardened under my crossed arms.

“You should be. Your advice cost me a sure thing last weekend.”

My mind flashed back to last week’s column—something about not putting out on the first date—or even the third.

I’d gone all starry-eyed virgin last week and tried to convince readers that sex didn’t need to be part of the dating equation for the first month, if not more, of a budding relationship.

“How else are you supposed to know if you can get along with someone, if you don’t spend non-naked time with them?”

Judging from this guy’s reaction, his date took her non-naked time very seriously.

“That was pretty shitty advice,” he told me now.

“Hey, I’m not responsible for what people do with what I write,” I tried to say. “Have you ever heard of free will?”

His dark eyes flashed before his full lips twisted in a scowl. “Are you kidding me? That’s part of your job. People ask questions, and you give them answers. They’re beggingyou to be responsible for them. That’s part of the power and privilege that you have as a columnist.”

Who the hell was this guy? I sniffed. “You seem to have an awfully big opinion—”

“What qualifies you to give that kind of advice, anyhow?”

The casual sweep of his gaze up and down my body left me breathless and tingling—in anger. Yeah, it was anger.

He interrupted me again. “Frankly, I don’t see you having trouble getting dates. But if you’re the kind of girl that takes your own advice, you won’t get many.”

“What are you insinuating?”

I stared at him. Was he serious?

“But,Miss Behave,” he continued, stepping forward, “do you ever let yourself change your mind? What happens if you’re with a man who smells good, tastes good, and wants to touch you in ways you’ve never been touched before?”

He leaned closer to me, the heat of his body closing in on mine. “What would you do if, deep down, you really wanted someone more than your good manners and holier than thou attitude allowed?”

“What if you wanted him pressing you up against a wall and sliding his hands under your skirt? Would you stick to your no-sex rule then?”

Was he offering?My heart pounded in my chest at his candor, at his words, at his… at him.

“Are you calling me a prude?”

“No, I’m calling your advice prudish. And kind of a cock tease.”

Dara, who was shamelessly eavesdropping, gasped. So did I.

“And I suppose you speak for the general male population?”

“Somebody has to,” he said. I could smell whatever spicy, citrusy shampoo he used, and the scent of coffee clung to him, as though he’d just spent half the day in a Starbucks.

I snorted, unconsciously taking a step back. “And I suppose you believe in sex on the first date.” Typical.

He shook his head. “No, but the first monthisn’t too much to expect. Especially if there’s a mutual attraction.”

“I just did. The whole can’t-wait-to-get-his-hands-under-your-skirt thing.”

I looked down at my tailored black pants. So did he. “Well,” he chuckled, “metaphorically speaking. Like your raisin.”

Now I’d had enough. “Who the hell are you?” I demanded, just as my editor rounded the corner by Dara’s cubicle. Thank god.“Rob, can you help me out here? This guy—”

“Oh, good!” My boss beamed as much as a middle-aged man could. “You’ve met the competition.”