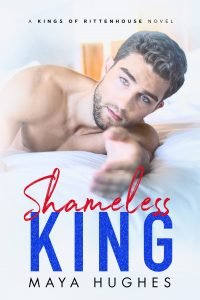 All heads turned at their entrance and a few rounds of applause and whistles broke out from other people sitting and standing around the bar. No one had even attempted to steal the empty booth and now I knew why. Hockey players. It was their spot. Their table, right in my section.

And right at the center was the one person I’d tried to convince myself I wouldn’t have to face for a long time. His mop of light brown curly hair bounced as he laughed with the other players.

His bright green eyes twinkling like he didn’t have a care in the world and why should he? Life was presented to him on a silver platter and it was crazy of me to think anything would ever change.

He looked just the same as he did in high school. Like he’d walked off the pages of some high fashion ad for real guys who played sports, had calluses and drove fast cars. Except he’d trimmed off every inch of him that could have been considered boyishness and replaced it with rock hard hotness. And I wanted to strangle him the minute I laid eyes on him.