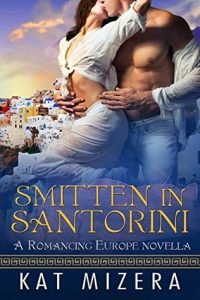 Pulling her knees up to her chest as she settled into a chair, Lena stared out at the water and contemplated all the bad decisions she’d made in the last four years or so. There had been so many and now that it was time to make things right, she wondered what she’d been thinking.

“You can’t sleep either?” Mick’s deep voice startled her and Lena’s hand flew to her chest.

“You scared me!” she huffed.

“Sorry.” He sank into the chair next to her.

For a while they sat without speaking, the silence oddly comforting as they each remained lost in their own thoughts.

“I wish you’d tell me why you hate me so much,” he said suddenly, not looking at her. “I was good to you, Lena.”

“It feels awkward working and living together like this. The last time we were together was hard since your parents hated me so much, and I hate even thinking about it.”

She snorted. “Obviously you don’t know your family.”

“Your sister wanted to rip me into tiny, irreparable little pieces.”

A frown covered his features. “You didn’t even try to get to know them.”

“It’s been nearly four years,” she whispered sadly. “Why does it matter?’

“It matters because we were in love!” he cried in exasperation. “And since your brother is still my closest friend, I’d like to get everything out in the open once and for all. I’m going to be here for the next two years, which means I’ll be seeing a lot of Apollo and most likely you too. The only way we can bury the hatchet is if we set the record straight. It’s okay if you didn’t love me… but I have a hard time believing that. There’s no way you faked the way things were between us.”

Lena felt tears prick her eyelids as memories flooded back. She’d made a terrible mistake four years ago. Several of them, actually. She couldn’t tell him, though. Not yet. Not in the middle of this crisis at the job site. Not before Sophia knew what was happening with her divorce. No, the time wasn’t right yet. “I was young and it was complicated.”

He didn’t say anything for a while, merely stared out at nothing before he finally spoke. “I was getting ready to tell Apollo about us.”

She turned in surprise. “You’d always said you wouldn’t tell him to protect your friendship.”

“That was in the beginning,” he said. “When we first hooked up that’s all it was—a hookup. Then we got serious and I wasn’t going to sneak around anymore.”

Regret shot through her. “Maybe we were just too young for something that intense, you know?”

He frowned. “It didn’t feel that way. It still doesn’t.”

She met his gaze in confusion. “What still doesn’t?”