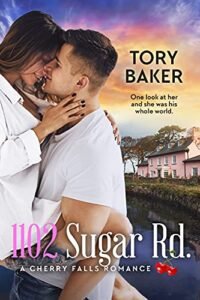 heriff Larson is about to show single mom, Faith, that he’s a man who always gets his woman…

I’ve had my eyes on Faith Bridges for months now.
I haven’t made a secret of it, but she’s not giving me the time of day.
In fact, she’s driving me crazy.

There’s a pull between us and I know she feels it, but she refuses to let her guard down.

I know why.
She’s a single mother and she’s got her son to worry about.
She doesn’t want a man to waltz into their lives and leave them.

What Faith doesn’t realize is that I’m not that type of man.
I’m her man.
I’m going to prove to her that she and her son can count on me forever.

Tory is taking you back to Cherry Falls once again with a sheriff that has fallen in love with a single mother and her son. He won’t stop until he claims them both as his own. Graham Larson is an over the top alpha who is out to steal his woman’s heart and hopefully yours, too. This is book is safe, hot, and full of a sweet happily ever after that will prove love comes when you least expect it—no matter how hard you fight it.