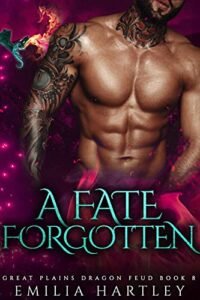 Esme
Ever since she was a child, she was plagued by strange visions and dreamt of the same man.
A man that turns out is real and not just a figment of her imagination.
Logan Montoya claims that she is his long-lost mate, Elliana.
A dragon shifter, like him.
But it can’t be. Such things aren’t real.
So why does she keep having those dreams? Why does he know her so well?
And why does she find it so easy to fall for him?

Logan
He failed Elliana once. Never again.
After awakening from his slumber, he never expected to find her again.
His family told him she was dead.
But there she was, right in front of him, in the flesh.
Though she doesn’t remember him, though she claims to be someone else, his beast knows her.
It doesn’t matter if she’s Elliana Barnes or Esme Williams.
He’ll do anything to win her back.