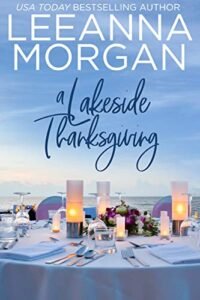 Barbara Terry is enjoying working with her sisters at the Lakeside Inn more than she thought she would. But with almost no winter reservations, they need to do something to increase their revenue to meet their loan payments.

Putting her marketing and social media skills to good use, she creates a plan that will give them the business they need—as long as she can continue to juggle running the inn with her job in San Diego and planning her sister’s wedding.

Theo is an award-winning journalist whose reputation has been destroyed. Starting a community radio station is giving him something positive to focus on while he comes to terms with what happened in New York City. But when the future of the radio station is in jeopardy, he turns to Barbara for help.

When the mystery surrounding his arrival in Sapphire Bay is revealed, Theo has to make the most important decision of his life. Will he trust the information Barbara has given him or risk losing her love forever.

A LAKESIDE THANKSGIVING is the third book in a new series that will follow the Terry sisters as they return to a community with big hearts and warm smiles. Romance, adventure, and intrigue are waiting for you in Sapphire Bay!