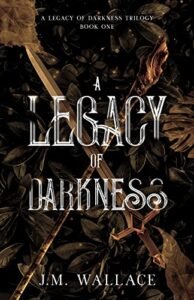 A Legacy of Darkness

Series: A Legacy of Darkness,

A reluctant King haunted by his father’s actions.
A Druid girl haunted by her bloody childhood.
And an impossible quest to save their country…

Gripping and action-packed, A Legacy of Darkness is an adrenaline-filled, high fantasy of sword and sorcery, mythical creatures, and a charming cast of characters, perfect for fans of Cinda Williams Chima and Holly Black.

Darkness spreads through the kingdom of Asterion. Shaye Wistari witnesses it with her own eyes as she returns home from across the sea. Fearful of the monsters lurking in the waters to the East, she must revisit the bloody memories of her childhood.

When the newly crowned King tracks her down to enlist her help, she learns only she, the last of the Druid line, can save the country she has tried to leave behind.

Paired with the son of the man who slaughtered her people and stole her magic, she sets off on an impossible quest to save the innocent citizens of Asterion.

Alongside a group of unlikely allies, Shaye embarks on a desperate journey to reclaim her power and face the ghosts of her past. She must confront her own demons, or the darkness will overtake her, leaving Asterion vulnerable to destruction.

A Legacy of Darkness is the first book in this exciting fantasy trilogy. From it, you can expect danger, political intrigue, and thrilling passion, as Shaye and King Sorin fight the darkness closing in on them.