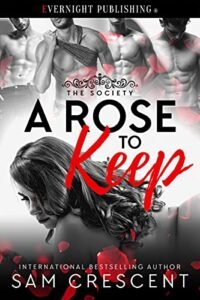 A Rose to Keep

Senior year, the four Saintly Devils will present a rose to their selected. One girl who will belong to them. It sounds so far-fetched, and I’ve never believed in rumors—until they give me the rose.

Gideon, Dante, William, and Mateo. Four of the sexiest, wealthiest, and most popular guys in the whole school.
For the first time in history, a girl turns them down. That’s me. I crumble up that rose and hand it right back to them.

Only, there’s so much more at stake than belonging to these four guys. There’s no way I could have known this was set in motion long before I even knew about them.

When my choices are taken out of my hands, I have to find some way to control my life. I’m not going to be a doormat for guys I don’t like, these four who don’t know me.

But I should have known better. They don’t want me. They’re following orders. I’m part of a contract, an initiation to something far scarier. Something called The Society.

I’ve got no choice but to submit to the four Saintly Devils, to become theirs.

They promised to protect me and those I hold dear.