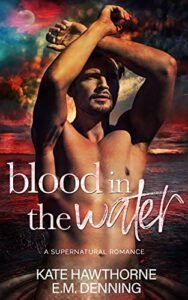 Blood in the Water: A Supernatural Romance

A Mer prince on the run from an arranged marriage and a melancholic vampire don’t have much in common, but fate doesn’t care about that kind of thing.

After fleeing his palace in the depths of the ocean, Adrian finds himself on land, with legs, and in the arms of Chad Bonaventure, a twenty-four (or four) year-old vampire who would rather be anywhere besides alive–or alive adjacent, as it were.

His world is turned upside down when he hauls a nearly dead (and super attractive) man out of the ocean and onto the beach. Chad takes Adrian home to recover, only to find out Adrian isn’t a man at all. He’s Mer. He’s a prince. And he’s really, really hot.

Chad is immortal (a vampire with a neck fetish), but Adrian has (an obsession with astronomy) less than a week before he has to return to the sea. Together, they throw caution to the wind and dive headfirst into bed…and love. Even though they’re running on borrowed time, Adrian and Chad decide—for the first time—to live for themselves, not anyone else. But Adrian can’t stay on land forever, and Chad can’t follow him into the sea.

Adrian has fallen in love with the vampire who gave him the stars, and Chad with the Mer who taught him how to live. They’re both about to learn hearts are wild things, even if they’re not beating.