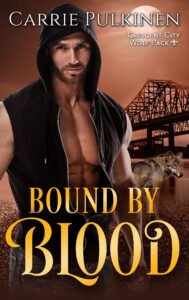 Ignorance isn’t always bliss…
Especially when the truth is this dangerous.

New Orleans homicide detective Bryce Samuels would rather save lives than investigate deaths. He earns a promotion allowing him to do just that, but he never thinks the people he’ll be tasked to save will be the ones closest to him. Until the woman of his dreams shows up on his doorstep, beaten and bruised. The mysteries surrounding her “accident” will leave him fighting not just for her life, but for his own.

A rogue can’t be expected to settle down, especially with a human cop, who doesn’t know werewolves exist. But that’s exactly what Alexis Gentry’s wolf insists she does from the moment she meets Bryce. When a run-in with her sadistic ex turns deadly, she seeks shelter with the sexy detective to avoid starting a war between the packs.

Alexis guards her heart as heavily as her secrets, but as the walls come down, she can’t help but fall for the sexy detective. Letting him into her supernatural world will endanger his life. But she soon discovers that what he doesn’t know can hurt him.

If you like a strong female lead, you’ll love this thrilling shifter romance.