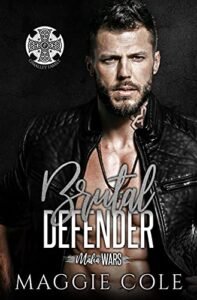 I choose Killian O’Malley out of desperation.
My papà gives me an ultimatum with one other option. I’ll do anything not to marry the Italian mafia boss who lives in Italy and is twice my age.
So I become Killian’s debt repayment. When I’m forced to pick, I don’t know he’s a boxer, a decade older than me, or has a body better than Zeus.
He’s bossy.
Arrogant.
He calls me a mafia brat and creates rules like I’m his child, saying he’ll tame me.
Our angsty relationship is so hot between the sheets my head is constantly spinning.
At times, he becomes a raging psychopath destroying anyone who even looks at me, including my ex who won’t move on.
I thought Killian would be a playboy, but he takes our vows to the extreme.
Everything about him makes him my brutal defender.
”Brutal Defender” is the eighth jaw-dropping installment of the “Mafia Wars” series. It’s an arranged marriage, age gap, Dark Mafia romance, interconnecting stand-alone, and guaranteed to have an HEA.