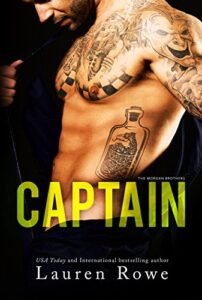 Captain. It wasn’t the way this kind of story was supposed to go . . . Insta-love isn’t supposed to turn into insta-hate. But that’s exactly what happened when the hot-as-hell dreamboat I met in a bar turned out to be a lying, cheating scumbag-player-douche looking for nothing but a little side action. Jerk. And he has the nerve to call me a liar and a “sociopath”? Assh*le. And now, three months later, through a mind-blowing series of events I couldn’t have predicted in a million years, it turns out my boss is marrying his sister in Hawaii and I’ve got to play nice with him for an entire freaking week. Okay, sure, I’ll put on a happy face this week and act like I’ve never even met the jerk before–did I mention his sister is marrying my boss?–but that doesn’t mean I’ll like it. And it certainly doesn’t mean I’ll stop secretly hating the arrogant bastard’s guts. Because I do. I hate him. I really do. I just wish my brain would explain the situation to my body . . . because every time he flashes that panty-melting smile at me, it takes all my self-restraint not to jump the bastard’s hot-as-f*ck bones. Indulge in the distinctive world of Lauren Rowe, as she invites you into a world filled with humor, passion, wit, and heat. One of the sexiest novels ever written, while still maintaining an enormous amount of wit and humor and originality. NOTE: CAPTAIN is a full-length, standalone sexy romantic comedy about Ryan Morgan (one of four Morgan brothers introduced in The Club Series).