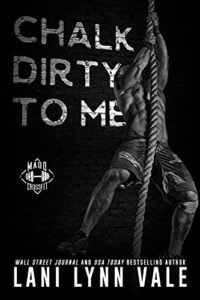 Chalk Dirty to Me

Two years ago, Cannel Crow experienced the worst day of her life. She was taken from a supermarket, and forced to spend a year with a man that treated her worse than a neglected, chained up dog.

One year later, she’s saved by a shadow organization that believes the law is a joke, and the only person you can count on is you.

After another year, she finally realizes the law’s limitation firsthand when the man that bought her from human traffickers, and then forced her to comply to his every whim for a year, is given a plea bargain for names of others in the operation.

Knowing that her abuser will spend the rest of his life in the lap of luxury under an assumed name, Cannel spirals.

At least, she begins to.

Then Wilhelm Schultz, call me Will, walks into her narrow world, larger than life, and changes her reality between one breath and the next.

The abrasive, larger, gruff police detective sees the world in black and white. There is right, and there is wrong.
Until he falls for a woman that needs him to see shades of gray.

The second he sees the world like she needs him to, there’s not a single thing on the planet that’ll stop him from fighting for her.

Not even the oath he swore to protect and do no harm.