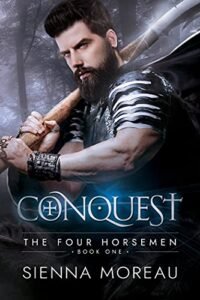 The Horsemen have been summoned once more.

As the first Horseman, Conquest is tasked with bringing chaos to the Earthly Dimension and paving the way for his brethren, War, Famine and Death. It’s been a long time since the rider of the white horse has been on Earth and he looks forward to bringing the mortals to their knees, one murder at a time.

Raziel is a broken Angel, unable to wield the power associated with Divine Beings. Shunned by all in the Heavens as far back as his memory goes, he is shocked when he is given a task well beyond his abilities.

As Conquest and Raziel find themselves in the middle of a war between the Heavens and Hell that neither understands, Conquest realises that Raziel may hold the key to all of it and if he doesn’t keep his Angel close, more than just his heart is at stake.

After millennia of war, will an Angel that even the Heavens cast aside be Conquest’s undoing?

Content warnings: Religious themes, extreme violence, gore and others. Please see full list at the front of the book. There is also a dog-sized spider named Paul who just wants to be loved.

This is an approximately 80,000-word romance that contains a HFN filled with snark and morally questionable characters.