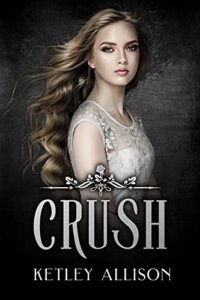 Series: The Thorne of Winthorpe Academy,

I don’t have a crush on Thorne Briar, Winthorpe Academy’s cruel, elite prince.
I want to crush him.
Thorne declared war on me tonight when he took away the one thing I had left.

But here’s where he got it wrong: I’m not about to crouch in the shadows ensuring he never sees me.

If I do, it would only be so he doesn’t see me coming.

The boy who made my emotions spike and swirl, crushed them in his hands.

He thinks he’s weakened me with heartbreak.

It only puts me in the perfect position to take away something that matters to him, too.

CRUSH is the second installment of a dark, high school senior romance containing mature themes such as bullying, enemies-to-lovers, and intense, potentially triggering, situations meant for 17+. It ends on a cliffhanger.