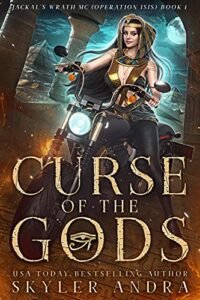 Curse of the Gods

After the death of my boyfriend, I’ve spent seven years hiding from bikers and atoning for my sins. Until my brother orders me to infiltrate our rival club and avenge our father’s death.

Destroying my enemies from within won’t be the hard part. Hiding my identity will be.

The Jackals are just like me, shifters with the power of Egyptian gods, and with Set, Osiris, Horus, and Thoth whispering in their ears, it won’t be long until they discover my secret.

Until a cruel and sick twist of fate changes everything.

The gods are cursed, and we as their servants, are bound as mates. Fucking fated mates. I’d rather die than lie with a Jackal.

Hearts won’t be the only thing I’m breaking when my enemies declare me theirs.

Curse of the Gods is book 1 in the Jackals Wrath MC series (Operation Isis) featuring a stubborn, yet strong heroine and four badass, haunted bikers with a touch of sweetness. This is a PNR Reverse Harem MC romance with four enemies to lovers, love interests.