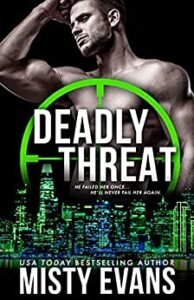 He failed her once. He’ll never fail her again. Don’t miss the next heart-pounding thriller in the SCVC Taskforce Romantic Suspense series from USA Today bestselling author Misty Evans.

If only she hadn’t gone out that night…

Speech writer Mia Livingston had a great life until she was kidnapped and held hostage by a man bent on revenge against her sister, San Diego’s new mayor. Now living under a fake identity, Mia’s days are spent hiding from the world and isolated from her family and friends. Panic attacks are frequent, and she longs to live like a normal person again.

If only he’d caught the kidnapper before that night…

Fugitive apprehension agent Malachi Cahill has never lost his man—except one. His failure to arrest the violent kidnapper, and the guilt over Mia’s abduction because of it, consumes him. Discovering the Feds plan to use the offender to set a trap for another criminal on their most-wanted list, his gut sounds warning bells.

But he’s ordered to stand down. Stay out of it.

He failed her once. He’ll never fail her again.

When the mayor is abducted by the same man, the search for her brings Malachi and Mia together. Their instant bond is only heightened by the searing attraction between them, and the comfort they find in each other’s arms.

The clock is ticking; the mayor’s life is on the line. Can Malachi finally catch his man? Or will he end up losing Mia once again to the one who got away?