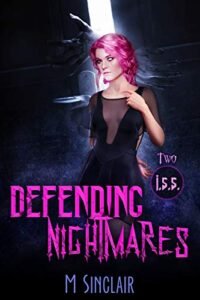 I crave my nightmares.

I crave the shadows.

The human terror organization MAM has come to our doorstep—we just don’t know what they want. When a nightmare who resides in the high-security section of the institute tells us that this chaos, this hate that the humans feel is because of a god terror, we realize that the solution to our problems lies outside of the institute walls. Walls I’ve never left before… Something that is about to change.

Traveling across the country in an RV with my nightmares? What could possibly go wrong? Apparently a lot, and when we find ourselves in a nightmare forest far from home, we realize that our problem is so much worse than we ever imagined.

Will we be able to save the institute, or will chaos and hate reign supreme?

Join Arabella and her possessive nightmares as one human woman finds the monster within herself to protect those that she loves. The ISS series is promised to feature terrifying monsters that include everything from the literal monster under the bed to Lucifer’s overbearing son, the prince of Hell.

If you love large harems, brilliant, sassy, but slightly naive female main characters with no fear, and a thrilling adventure filled with steam, vengeance, and a happily ever after, then you are absolutely going to love this.