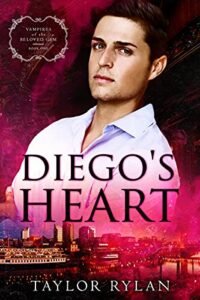 Series: Vampires of the Beloved Gem,

Can Diego prove to sweet Nigel that he’s not the monster that some think he is?

As head of security aboard the Beloved Gem, Diego Santiago loves his job and position in the coven. He’s happy for his fellow vampires that have found their beloveds and longs for that connection—someone to care for, love, and call his own. Because he often wonders if he truly is a monster like those in his birth coven. Does he deserve such a thing? When he finally visits Amherst for a little princess’s birthday, he wishes he’d gone sooner.

Nigel Frost loves children; it’s why he works with them every day. He’s adjusted to his new life in the Amherst Coven, but he wants more. He longs for a mate and children of his own. Sadly, he’s usually too tired to leave the coven to chance searching, and he knows his mate isn’t one of the warlocks at the coven. When he suddenly scents his mate at the coven, he’s thrilled with the sexy vampire that the Fates have blessed him with.

Diego and Nigel both have parental drama, but Nigel is determined to show his vampire that he’s good and deserves a beloved and children. Of course, things can’t be easy or go smoothly, can they? When trouble arises for the soon-to-be parents, will they resolve everything before the baby is born?

Diego’s Heart is the first book in the Vampires of the Beloved Gem series. Each book in the series focuses on a different couple, but these books should be read in order as there is an ongoing backstory, and previous couples will make appearances in future books. This is a fated mate MPREG story with plenty of sexy times. You should expect all the normal vampire shenanigans and sometimes love bites in unexpected places.