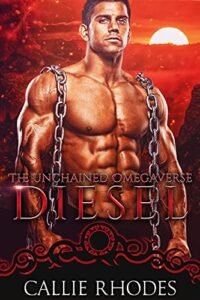 He was battered but not broken.

Diesel barely escaped one hellhole with his life…only to be captured again and forced into an underground fight ring. Nursed back to health by the only tender soul he’s ever met, every day a little more of his strength returns, and he burns, not only for revenge, but also to claim the only woman brave enough to stand by his side.

She was damaged but not defeated.

Ruby never saw an alpha in the flesh before her brothers brought one home in the back of their truck in chains. Even battered, bound, and unconscious she can sense the awesome power running through the massive man’s body. She feels the pull to help him from somewhere deep in her soul, but she fears the price she’ll have to pay.

Once there were boundaries…but now that their chains are broken, these alphas refused to be contained.

Diesel is the third book in The Unchained Omegaverse, a hot new ABO romance series featuring knotting, heats, and possession. Wear gloves, cause this sh*t is hot.