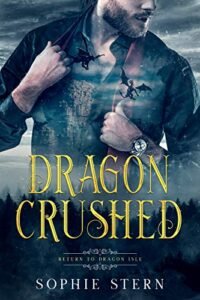 Anything can happen on Dragon Isle…

One feisty dragon + one pissed-off human = one relationship that won’t be easy.

Oliver has been busy building his company. As the CEO of a million-dollar company, he’s got a lot on his mind. When he’s feeling honest, he’s more than willing to admit he threw himself into work after his relationship with Lana failed. He let her down, and he’s never forgiven himself.

When a freak storm forces the inhabitants of Dragon Isle to hunker down, Oliver finds himself trapped with the one person he never thought he’d see again.Lana is stuck at his house with no place to go, and Oliver realizes that when it comes to her, some things never change.

***DRAGON CRUSHED is the second book in RETURN TO DRAGON ISLE. This is a spinoff of the DRAGON ISLE series by Sophie Stern. Reading the Dragon Isle books is highly encouraged, although not required in order to enjoy this story. Dragon Isle begins with STEPDRAGON, which is a quick read introducing the island, and is followed by MY LORD AND DRAGON.**