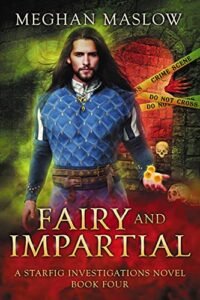 All Twig Starfig wants is to settle into mated life with his wizard and be a good leader to his clan. No drama. No heartache. A happily-ever-after fit for a dragon. Or half-dragon, at any rate.

Instead, Twig and Quinn get roped into a new case involving missing orc stones. Yes, those really are a thing. Twig’s dad is on the PR warpath . . . again. Quinn’s little brother can’t seem to stop pining over their housemate. Someone—or something—seems to be following them. And getting qualitytime alone with his wizard is more difficult than keeping one’s virginity at an incubus party.

To make matters worse, Twig’s old enemies start dropping like fairyflies, and they find themselves smack in the middle of an inconvenient murder investigation with a certain red fury as the main suspect. With everyone in Lighthelm convinced of Bill’s guilt—and by association Twig’s—Starfig Investigations is on the case.

Is there no one in the Elder Realm who’s fairy and impartial?