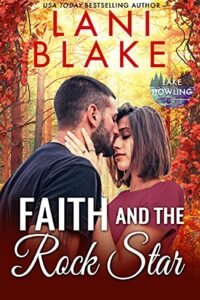 Childhood Sweethearts, a Rock Star, and a parrot called Syd!

Ryan Lawrence wasn’t on Faith Harris’s list of favorite people. He’d broken her heart after one magic night together, then walked away to find fame. Forgive and forget wasn’t her motto, so when his handsome face appears back in Lake Howling, it’s fair to say she’s not happy. She’s stronger now, a businesswoman who doesn’t take any crap from anyone. Especially not a rock superstar with an over-inflated ego. He may be a man loved by thousands, just not her!

So why did she kiss him?

He’s back in Lake Howling to see his sister and instead finds something Ryan hadn’t known he was missing. Friends and Faith. Friends he understood, Faith he didn’t. She refused to acknowledge his success, and her cool attitude gets under his skin. But he’s never walked away from a challenge, especially one that stirs him up like Faith.

When his life follows him from L.A. and threatens Faith, he knows that leaving is no longer an option, because if he did, he’d be leaving more than his home. He’d be leaving his heart behind too. Ryan will do everything he can to protect the woman he now loves and make her understand he’s sticking. He’ll fight for a life together, no matter what it costs him.

If you enjoy your small town romance sizzling with a side of crazy, then Lake Howling is for you. Meet the real authority in town – the local book club – and Mrs. C., the interfering ex-owner of the Cakery who has no idea of personal boundaries, and a parrot named Syd who swears like a drunken sailor! Swim (or skinny dip!) in the ice cold lake, then warm up with coffee and a mystery muffin at The Hoot Café. Plenty of feels and LOLS, all wrapped up in a town that will have you packing your bags to head there, from the very first page.