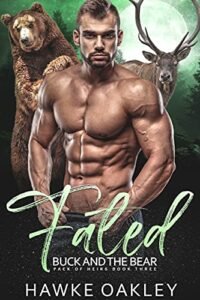 Nobody wants to be the only omega in the family.

Ashe has always been alone—at least, when it comes to his biology. All his cousins are alphas, but he’s stuck with the ‘inferior’ role.

Fed up with it all, Ashe tells himself he doesn’t want a mate anyway. It’s a lie he forces himself to believe until he meets an alpha who changes everything.

An alpha who saves him, protects him, loves him—all without saying a single word.

Nobody wants an alpha without a name.

Abandoned by his family for being mute, Bear adopted the name of his shifter species, a powerful grizzly. All Bear has ever wanted was someone to love, but Bear lacks a name and a voice. Who could ever want him?

He might not talk, but other shifters do. When Bear hears rumors of spirits with wonderful magic, he sets out to find them in hopes of being fixed. Maybe then he’ll finally find the love he craves.

Or maybe, magic was right under his nose the entire time—in the form of an omega who teaches him he can’t fix what isn’t broken.

Fated: Buck and the Bear is a 45,000 word mpreg book with a grumpy disabled alpha whose secretly a cinnamon roll, a stubborn omega twink who won’t admit to being a huge romantic, mutual pining, size difference, hurt/comfort, fluffy and steamy scenes, and a HEA as usual!