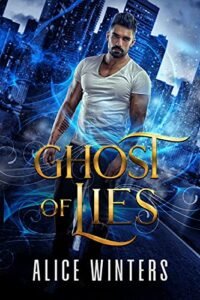 Hiro
Though I was born with the ability to see the dead, I struggled with it until my brother was killed and his ghost was left behind. Now, I’m determined to figure out who is responsible for his death… the problem is that Detective Maddox Booker, the one working the case, is a grumpy and stubborn man who wants nothing to do with me and definitely doesn’t believe in ghosts. It doesn’t help that I keep finding myself looking ridiculous in front of the detective, thanks to interfering ghosts who enjoy laughing at my expense. Still, the more I’m around Maddox, the more I realize that beneath that surly exterior is a kind and caring man who will do anything to help.

Maddox
When another man dies, I know we have a serial killer on our hands—the same murderer who has remained elusive for a year and a half. To add to my frustration, I keep running into Hiro at crime scenes only to hear him claim that he can talk to ghosts. The words of the dead could lead us to the serial killer and even tell us who is next, but ghosts? There’s no such thing as ghosts. Hiro is determined and charming, and no matter what I do, I can’t stop letting him get involved. He’s definitely snagged my attention, but when he nearly winds up dead, I know he’s getting closer to the truth—and if I don’t do something soon, he might be next.

Ghost of Lies is full of action, mystery, humor, and romance. Though more is planned for this couple, the mystery is solved and there is a happy ending.