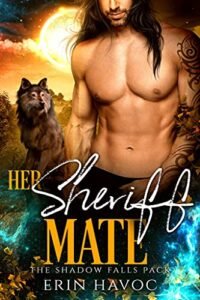 Life as she knew it is over. The full moon brings real trouble.
A human looking for her brother.
A sheriff who must keep the secret of his city safe.
And someone is on the prowl…

Daniela
I need a break. Between my lack of a job, no friends, and the mental disorder, I’m dying for a vacation. And Shadow Falls would be the perfect place for that if not for the reason behind my trip.
My brother is missing.
His own disorder got worse and worse, and he decided to move to this small town I had never heard about. Now he hasn’t replied to my messages in a week, and my gut tells me something is terribly wrong.
I want to help with the investigation, but the sheriff won’t let me. I can only hope he’ll yield, but it’s hard to argue properly when I’m gawking at his huge biceps or drooling all over his sharp features.
I need to find my brother and leave. This town and its sheriff are turning my head upside down.

Zev
I never let a case go unsolved. I pride myself on swift, peaceful resolutions. The fact I’m a wolf shifter is a great advantage.
Then how come a person disappeared under my nose?
With the local coven holding a meeting and the usual fights among clans, I have my plate full.
Then curvy Daniela arrives, smelling fantastic and looking like a Goddess. She behaves like one too, never taking no for an answer. She intoxicates me, and I can think of nothing else.
But I won’t fall for her pretty face and juicy body. I’m determined on waiting for my mate, and Daniela smells like a human.

Will Zev fall for Dani nonetheless? Can they be happy with her brother missing and their differences?

The Shadow Falls Pack is a new series by Erin Havoc. Though each book follows a couple, there’s an overarching plot. Steamy scenes ahead. For adults only.