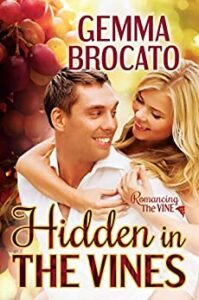 Hidden in the Vines

A Romancing the Vine novella

Growing up in the supersized shadow of a famous mother led Jules Capelli to retreat far from the glamorous lifestyle. She owns and runs Team Vino, a team-building operation based in a working vineyard. In the midst of a seminar, her high-profile, high-maintenance mother insists Jules shelter her among the vines after recent plastic surgery. Keeping the woman hidden will require a monumental effort, especially with two reporters from an entertainment magazine in the attendance.

Alex Dixon has known from the minute he checked into Team Vino for employer-mandated team training, that Jules is hiding something. Learning her secret is key, but he’s more interested in getting to know the appealing woman. Jules’s secret is a great distraction, but once discovered, making sure it remains hidden from his bottom-feeding co-worker is even more of a challenge.

Working together as a team, Jules and Alex discover a mutual attraction and a common goal . . . keep the secret, build a team, and uncover love among the vines.