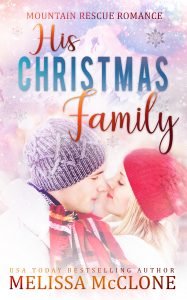 His Christmas Family by Melissa McClone

Two and a half years after Grace Wilcox’s husband died a war hero, the hole in her heart and life remains. She wants to start over with their young son, but a snowstorm thwarts her plans, stranding them in Hood Hamlet. When Grace knocks on a stranger’s door in search of help, a handsome firefighter comes to the rescue.

Bill Paulson invites the two wayward travelers into his home. A relationship and family aren’t on his radar, but something about the widow and her son touches Bill’s heart. While Grace’s truck is being repaired, she wants to give her son a special Christmas. An overgrown kid who loves the holidays, Bill decides to do the same for Grace.

Attraction soon flares between Grace and Bill, but she won’t gamble her heart on another hero and he doesn’t consider himself husband material. Can a little Christmas magic show them love and a family are worth the risks?

Previously published as A Little Bit of Holiday Magic.