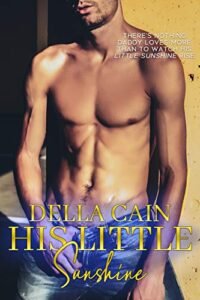 There’s nothing Daddy loves more than to watch his Little Sunshine rise.

Brad paid his dues for years, looking for a way into his dream job as an interior designer. Being an assistant was great and all, but he wanted to give people places they longed to be… He had no idea his break would come in the form of an adult’s nursery. Flung into the world of caregivers, littles, and more, Brad’s eyes are opened to a world he never fathomed existed and finds himself increasingly drawn to.

Quinn spends his days as ranch manager and his nights alone. He’s never minded. Not really. Not until Brad started to hang around the ranch. Now he’s all Quinn can think about. The shy man blushes at the slightest compliment and can’t even talk about his job without turning into a babbling mess and brings out a daddy side Quinn has long suppressed.

Brad might need a daddy, but he isn’t ready for one. Too bad because Quinn would love the role.

One evening around the fire pit, everything changes with one sentence: Too bad there’s no daddy out there for me.

His Little Sunshine is an age gap MM romance featuring a smexy cowboy daddy, his awkwardly adorable boy, age play including adorable onesies and ABDL, and two men discovering opposites really do attract. His Little Sunshine is the second book in the popular Country Daddy, City Little MM romance series. Each book focuses on a new couple who find their Kinkily Ever After and includes some familiar faces from Collared Ever After.