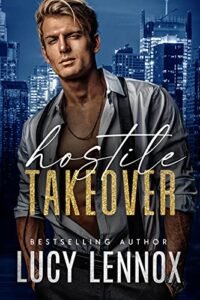 It was supposed to be a prank. A silly frat boy dare.

One hot moment in a hidden storage closet. One kiss. No consequences.

But if you get that close to a man with fire in his eyes, you’re gonna get burned, and I was no exception. One taste of Grey Blackwood ruined me for life.

The way Grey sees it, I was the one who did the ruining. I humiliated him. Wrecked his life. Destroyed his future.

Now he’s taking down the companies owned by every frat boy who did him wrong. And when he comes for my family’s company, the quiet life I’ve built for myself far away from Manhattan comes crumbling down, too.

But when Grey’s standing in our boardroom, threatening a hostile takeover and demanding I negotiate on behalf of my family, I don’t see an enemy. I see the chance I’ve been waiting for.

The chance for another night in his arms, and hopefully a whole lot more.