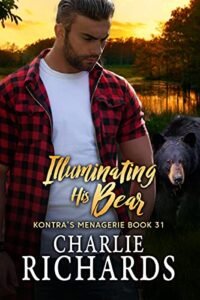 On the Road: On the mend from the biggest mistake of his life, a giant panda shifter is on the cusp of receiving the greatest of gifts… if the man’s mind can be restored.

Zhaul had just wanted a night of fun… away from the responsibilities of his panda sleuth. Accepting the offer of a back-room hook-up from the wrong person landed him in a cage as a science experiment. Upon being rescued, Zhaul is devastated to learn that no one in his sleuth had even reported him missing. Meeting his mate lifts his spirits. Learning that the black bear shifter has been be-spelled by witches, Zhaul thinks perhaps Fate is laughing at him. The alpha of the shifter gang who’d rescued him as well as his mate—Kontra and Tim—assure him that there is a way to break the spell, and they’ll do everything in their power to help him find it. Then he discovers a way to connect with his mate—climbing trees. Can Zhaul discover how to build on that before those who’d held him captive come calling?