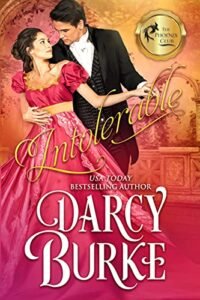 Every three years, like clockwork, Ruark Hannigan, Earl of Wexford loses his heart. Alas, he promised his father he wouldn’t marry until the age of thirty so that he’d be certain in his choice. When his best friend’s sister needs him to pose as a potential suitor to garner attention on the Marriage Mart, he’s the perfect candidate—if only he hadn’t kissed her in secret.

Lady Cassandra Westbrook can’t forget the incident between her and Wexford, and she’s having a devil of a time focusing on finding a husband. The fact that her father intimidates every gentleman has made her quest intolerable, and her two brothers who could help are proving completely worthless. But if she doesn’t settle on someone, her father will arrange an “acceptable” marriage by the end of the Season.

Finally, Cassandra has a chance at courtship, but, frustratingly, it’s not with the impulsive and irresistible Irishman her father detests and she desires. However, when Ruark sees the woman he passionately wants—despite his better judgment—swept into the arms of another man, the prospect of losing her becomes intolerable.