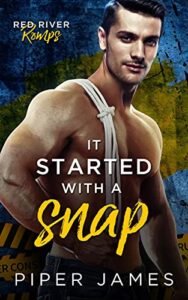 It Started with a Snap

Have you ever known someone who seemed to have their life together, but one tiny scratch beneath the surface revealed they were two seconds from hitting rock bottom? Yeah. That was me.

Ember
I’d always been the wild one who did what she wanted with zero apologies. The life of the party. The one who swore she’d never settle down because living in the fast lane was the only place to be. Well, as fast as it gets in Red River, Texas, anyway.
But my free and loose lifestyle came back to bite me hard. My quaint little boutique, Glowing Embers,was on the brink of collapse thanks to a few bad decisions and a decades-old building that was threatening to fall down around me.
I refused to tell anyone how bad it had gotten, but when a support beam snapped thanks to millions of tiny, wood-chomping termites, my friends refused to let me deal with it on my own.
They called in backup. Ethan Perry, my quiet, gorgeous archenemy—and my best friend’s brother-in-law— volunteered to renovate the entire place on his own time and his own dime.
I wanted to refuse, but what choice did I have with my life’s work on the brink of collapse?

Ethan
Ember Moore was the opposite of me in every way. Where I was quiet and reserved, she was loud and extroverted. While I exercised complete control, she let her wildest impulses rule her decisions
And yet, I’d felt drawn to her since the moment I first laid eyes on her. I tried to fight it. I told myself the attraction was just loneliness in the wake of my three brothers finding love and settling down.
But when I saw her kiss another man, my jealousy went on a rampage, and I made the mistake of getting drunk and saying awful things about her—things she just so happened to overhear.
And now, she hated me.
When my brothers asked me to help her, I dreaded the prospect, but I couldn’t say no. She needed me.
And within a few days, I realized I needed her just as much.
An uneasy truce and an unlikely friendship turned into much more, but could we survive a life-altering surprise that would change both of us forever?
This is a standalone romance with lots of spice and snarky humor. It is the fourth and final book in a series of standalones featuring four hot brothers finding love in a small town. HEA guaranteed!