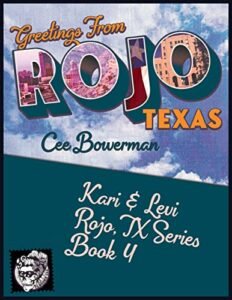 Kari has spent her life as the Texas Knights’ princess, but no one realizes the price that comes with that title. After losing the love of her life to the military, she rushed into the arms of Mr. Wrong. After years of abuse, she finally escapes and comes home to settle in with her family, taking that crown back almost seamlessly.

Kari has a secret, and her family and friends don’t yet realize the true danger in that secret.

Levi had to walk away from the woman he loved because he’d signed his life over to the army. He served his time and then went on to be a police officer just hours away from his hometown of Rojo. The life of a cop is always dangerous, but when he’s targeted along with his partner, Levi’s life changes forever, and he ends up back in Rojo closer to his family and old friends.

Two damaged people who are just trying to survive find each other again in the third book of the Rojo, Texas series. Can they take care of themselves while also trying to care for each other? Sometimes, first loves just aren’t meant to be, but these two stubborn fighters won’t let anything keep them down – or away from each other.