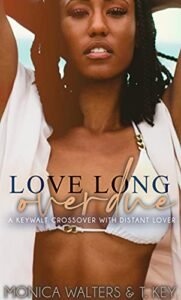 Jamila Campbell appears to be the epitome of a woman that has life all figured out. However, that perception couldn’t be more wrong. Being forced into single parenthood, she’s determined to be strong, independent, and driven. That doesn’t mean that she doesn’t have what she deems as fun. Wanting a relationship but not settling for anyone who doesn’t make her feel like her child’s father is what has her love life at a stand-still. So, she opts to get what she needs from men and discard them if they are of no further interest to her.

That all comes to a screeching halt at her cousin’s rehearsal dinner. Island fun with visitors from Texas, welcoming them to Kingston, leads to a night she’ll never forget. A romp in the sheets with a stranger, advances to an inner desire so strong it’s nearly impossible to fight. Kyle Jackson, the groom’s brother, has penetrated her rough exterior and gets a glimpse of her heart. There’s only one problem: he lives in Texas.

The man that she’s been waiting for… for over seven years, has finally found her, but there’s that distance hurdle that seems impossible to overcome. She’s not willing to leave Kingston. He’s not leaving Dallas. How can a meaningful relationship survive with over fifteen hundred miles between them? Will Jamila eventually concede and leave Jamaica and her family behind, or will she lose out on love once again?