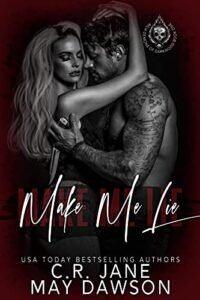 Save this book
Tropes: Bully, College, Dark, Enemies to Lovers

The world knows me as the Demon’s Daughter.
He’s a famous serial killer. And I may have been his accomplice.

But no one knows for sure except for me.

The dangerous, cruel men of the Sphinx secret society intend to uncover my secrets…and break me.

Stellan, my childhood crush who lost his sister to the Demon.

Cain, the boy with the face of an angel to who manipulation comes as easy as breathing;

Pax, the dark psycho who hides behind his fists.

I hoped for a second chance at Darkwood University, only to have my dream ripped away the first time I kissed one of the handsome bastards.

They know who I am.

And they’re determined to make me pay.

They should have thought twice about who they were playing with.

Because I am the demon’s daughter. And just because they have the power, the connections, the faces and bodies of gods… do they really think they’ll win?

I wanted a new life, not a war.

But if they insist, we’ll see who ends up playing.