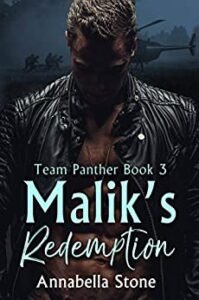 Ex- Mossad agent Malik Dahan has lived for years in the shadows, straddling the very fine line between his own moral code and the missions his assassin role required. Two years ago, refusing an order from Mossad’s Operations Base near Glilot Junction on the west end of Tel Aviv put him on a collision course with Team Panther. The time has come for Malik to face his demons and the secret he has been hiding. A secret that can rip apart the very essence of everything that is Delta Force – Team Panther.

Zeke Givens seized the chance to escape the mob violence he grew up with to become a Texas ranch hand. Months later the last man he expected to see on the ranch is the hottest one night stand he could ever remember. A man who stole his breath and drew every protective instinct he had to the fore. Zeke will use every dirty trick and all the skills he learned at his father’s knee to protect Malik, even if it means losing the only family he has left.

Can a one-night stand turn into a Happy Ever After? Malik just needs to stop running long enough to realize that Zeke is his redemption and their happy ever after is right there waiting for them.

Malik’s Redemption is part of the Delta Force – Team Panther Series. While it can be read as a standalone… to ensure maximum enjoyment, it is best read in series order.

This book was first published in 2018