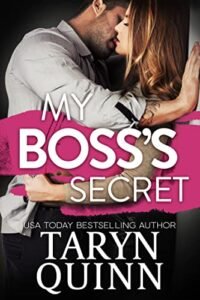 Sleeping with the hottest mystery man ever was my ultimate fantasy, until he became my boss…

I’m a good girl, the kind who didn’t hesitate to say yes to my beloved grandmother’s request to go with her to Fiji after she broke up with her fiancé.

Sun, sand, relaxation, who would say no?

But I never expected to meet a handsome, exciting stranger who wanted to give me the world.

Passion, mystery, so much pleasure, all at my fingertips.

For a night, I was his fairy tale Cinderella. But then the no strings we’d agreed on became awful sticky when I found out he’s my boss’s best friend and a powerful, millionaire divorce attorney to boot.

So, I ran. And I regretted it every second since.

The next time we met, it was outside my office building. He saved me from a fall, and for an instant, I was his Cinderella once again.

But he had a secret: he was going to be my new boss.

He wanted more from me. Everything. And this time, he wasn’t letting me go.

Author’s note: My Boss’s Secret is a standalone office romantic comedy set in our small town Kensington Square, which is near Crescent Cove. It has a happily-ever-after ending and no cliffhanger.