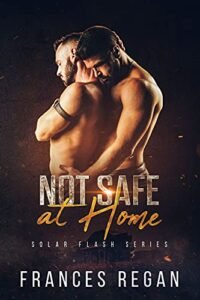 Not Safe At Home

Ex SAS reserve, S.Sgt. Rex Brown has worked undercover contracting since his early retirement from Special forces active reserves, after the incident that broke up their team in Afghanistan. Returning to Blue Hyde at the behest of Capt. Sam Richardson in a bid to aid with the last known location of ex-lover and teammate MN1 reserve Sgt Ryan Combe.

Mr Stefan Combe and his husband Finn have been searching for Ryan for two years; extremely worried for their son, amputee and sufferer of C-PTSD with Autism make Stefan and Finn nervous for Ryan’s survival. With Ryan missing, Stefan panics as one of Ryan’s teammates turns up at their home with another Encrypted security officer asking that they follow them to Blue Hyde, desperate for news of their son they follow.

Ryan has been missing for two years. He holds a secret Max would kill for; during the solar flash, E squadrons helicopter went down on route to Australia with the youngest Royal on board. The Royal is related to the Combe’s. Stories of princes and princesses told to Ryan as a child were not just fairy tales. He is dying; his body is shutting down — Ryan’s nights are filled with memories of only one man, a man who made him feel safe and loved. During these times, his brother calls from beyond the grave, hold on, help is coming. But the days are dark, pain from abuse and continued rape, his prosthesis long taken away, the stump is raw hips dig into the stone-cold floor, his saving grace that consciousness isn’t always there.

Hope flares to life with the notice that Ryan still has his SF microchip. Only high-level clearance can be given to activate the chip. Although ex ghost Marc Johnston seeks Presidential help, Ryan is within reach. Will the activation of the microchip implanted into all Special Forces operatives bring the results they need to find Ryan, or will the activation of the chip be too late?