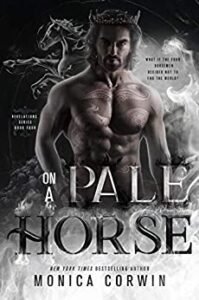 On a Pale Horse: an Apocalyptic Paranormal Romance

Once upon a time, the Horseman of the Apocalypse decide against ending the world. They move to Earth, take human jobs, and start trying to live a normal life.

But normal isn’t possible for the Gods.

Cloris lives thousands of years before she becomes a horseman. But it isn’t until she feels the breath of Hades on the back of her neck that she truly feels alive.

Hades has been betrayed, tortured, imprisoned, and stripped of everything he loved. Two thousand years ago, Cloris saved him from that life and helped him put his fragile body and mind together again.

As Ragnarok unfolds, Hades and Cloris must finally face their feeling for one another or risk being consumed by them. Hel has returned to claim Hades once more, and she brings the army of the dead with her. Cloris will stop at nothing to save the man she loves, even if that means risking the rest of the horseman in the process.