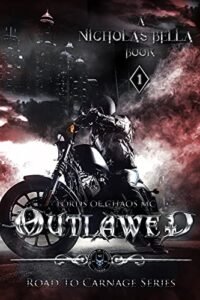 Noah “Ace” Murphy, Sergeant at Arms, brother, and son. He’s a Man of Carnage, who is loyal to his club. One night, coming home from visiting his brother, Diego, in prison, he almost literally runs into a young man desperate for help. Kenshin Yamoto is everything Ace knows he should stay away from. But one look into those pleading, soft, brown eyes and he finds that he can’t turn Kenshin away. Now, they just have to hope the threat Kenshin is running from doesn’t destroy everything Ace holds dear, including Kenshin.

Diego “Dragon” Murphy, who’s doing a nickel upstate, is looking forward to the day he can give the prison his middle finger. But before he can do that, he gets a visit from his brother, Noah, and is given a mission to eliminate an imprisoned DEA snitch before he can testify against a powerful mob boss. With his plate full, he doesn’t expect to get a new cellmate. To his shock, Richard Harrison stokes a fiery desire within Dragon that he’s never felt before. Richard claims he’s straight, but Dragon wants to put that to the test…