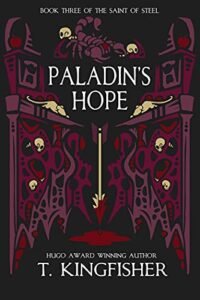 Series: The Saint of Steel,

Piper is a lich-doctor, a physician who works among the dead, determining causes of death for the city guard’s investigations. It’s a peaceful, if solitary profession…until the day when he’s called to the river to examine the latest in a series of mysterious bodies, mangled by some unknown force.

Galen is a paladin of a dead god, lost to holiness and no longer entirely sane. He has long since given up on any hope of love. But when the two men and a brave gnole constable are drawn into the maze of the mysterious killer, it’s Galen’s job to protect Piper from the traps that await them.