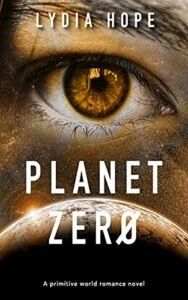 A spaceship crash survivor, Addie Rye is lucky to be alive. But being stuck on a primitive planet isn’t exactly the epitome of luck. With no way home, Addie has no choice but learn how to use stone tools and catch her dinner before cooking it while attempting to befriend a tribe of wild nomads who inhabit this planet.

His injuries rendering him useless in the eyes of his tribe, embattled Zoark is content to occupy the lowest rung of the social ladder. When Addie ingratiates herself into his tribe, he doesn’t trust her and goes out of his way to make her feel unwelcome. But soon, he is captivated by her grit and resilience and enchanted by her human spirit. Against his will, his long-dormant protective instincts come to life.

As the tribe moves around this vast alien steppe, tensions mount among its people, augmented by dwindling resources, violent predators, and marauding rivals. Only the strongest will survive, and Zoark needs Addie to keep him going. Knowing the fate of the tribe may one day depend on this man, Addie agrees to his impersonal proposition. But can her human heart remain detached?