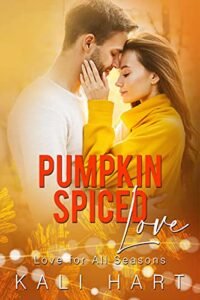 Series: Love for All Seasons,

Owning my own bakery has been a lifelong dream.
My unique home-based business, Marvelous Maple’s, found quick success as the only bakery in Carter Falls.
My baked goods sell out daily.
Winning this year’s Pumpkin Spiced Baking Contest is in the bag.
Until competition moves in downtown.
It’d be easier to hate the new owner if he wasn’t so sexy and charming.
And into me.
Dax Carter brings out my competitive spirit in a way that both unsettles and excites me.
Just because my enemy’s kisses nearly make me forget my own name doesn’t mean I’m going to let him win the baking contest.
I only have to make sure I don’t go and fall in love with him.

Gran and I made plans to open a bakery in Carter Falls when I retired from the Navy.
Only she passed away before we could make it happen.
Which is why I moved to town as soon as my military service was fulfilled.
I’m opening the bakery in her memory after the local baking contest is finished.
Winning it would be great publicity for my new business.
I had no idea there was another baker in Carter Falls until Maple Hollands storms up to my door, promising to beat me in the contest.
Her competitive spirit is irresistibly sexy.
The more I’m around her, the harder I start to fall.
I don’t care if she thinks we’re supposed to be sworn enemies or that this town can’t support two rival bakeries.
I’m determined to prove to her that we’re meant to be.