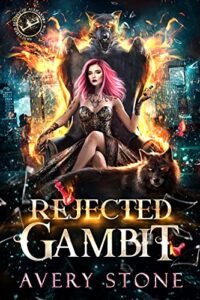 He stares into your eyes with nothing but hate, forced to acknowledge the truth of your brilliant strategy. Your first move puts you in the lead, but will you achieve checkmate?

Being appointed leader of the Grandmasters should be another check in your column of wins, but instead, the news triggers something dangerous, because those who surround you want nothing but bloodshed.

Former friends and unexpected allies are forced onto the chessboard, but only fate can determine if the pawns on the side of good will prevail. Entwined pasts will be revealed, packs will be united, swords of destruction will yearn for ownership, and love will blossom into something magical…but it will all be threatened by the plague of darkness that hovers over your head.

Your newly spurned lover may envy your prosperity, but it’s the rejected mate from your past life who is determined to destroy everything. You only have one chance — a fated opportunity — to unmask him and strike. A dangerous gamble you’re more than ready to undertake.

In this game of love and war, only one can rise up and win.
A rejected gambit will lead you right to the throne, but can you survive the flames that await?

REJECTED GAMBIT is a full-length (200,000+ word) Paranormal Rejected Mates Romance. Recommended for 18+ due to language and sexual situations.