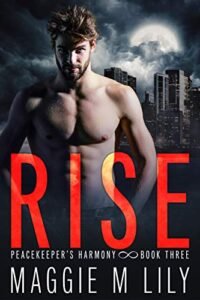 I was officially the Peacekeeper of legend. I had mental bindings to every single beast affinity in the world to prove it.

Now, if I could just find my pants…

My brothers were back to thinking I had an easy lot in life. They weren’t wrong. It would be a sweet gig.

Sianna would be Overlord. I would be Peacekeeper. We’d have our shared love bonds.

A portion of beast affinities, including my ex-girlfriend, wouldn’t follow Sianna as a leader.

After attacking my family, my circle, and random bystanders, it was clear the opposition didn’t mind collateral damage. If they wouldn’t come at us directly, we’d need to unite the splintered shifter populations and force action.

Could we navigate the politics and negotiations while still holding tight to what mattered?

One thing was certain: I wouldn’t give up the binding again. Not for anything—even if the bindings meant a difficult transition to leadership.

No. If the shifters wanted a fight, they’d get one.

Rise is the jaw-dropping conclusion of the Peacekeeper’s Harmony series.