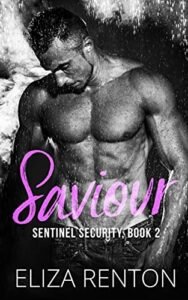 Save this book
Genre: Military Romance

Cool Under Pressure—Until she hits his hot button
Knight is the iceman head of Sentinel Security. A loner dedicated to the mission. Until he meets Lily, a woman who questions everything he believes. He falls hard and fast for the midwife, but Lily has a stalker. Her ex-husband. Out of fear for her friends and Knight, she runs, leaving him angry and betrayed.
Months later, in Africa, terrorists kidnap Lily and Sentinel executes a daring rescue. Home in England, both realise falling in love may not be a choice. But Lily has a secret. A secret that puts Knight on the run. Before they can move forward, Lily’s past threatens to destroy their future.

Sensitive Content Warning
Before Lily reaches her happy ending with Knight, her story contains scenes of coercive control preceding domestic abuse. This may be difficult and possibly triggering for some readers, so please take care of your personal safety and emotional well-being and seek support if you need it.