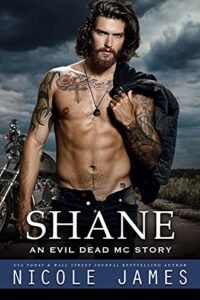 Shane—
I live at the end of this dark deserted dead-end street for a reason.
I don’t like neighbors coming around my place. There’s only one other house down here. It sits across the street from me, and has been deserted for years.
I like my privacy, so I’m pissed to learn that that vacant house just got un-vacant.
I’m also not into kids, so when one comes snooping around my house, I’m even more pissed. Rugrats are not my thing.

When I return the kid to the other side of the street, I come face-to-face with one pissed off Mama-bear and the hottest chick I’ve ever laid eyes on— and that’s saying a lot.

Suddenly, I’m all about being neighborly, the only problem is she wants nothing to do with me.
Can I blame her?
Guess I’ll have to change her mind.
She’s mine. She just doesn’t know it yet.

When my Evil Dead MC brothers roll up in a hoard, their drag pipes shake the window glass, so I know Miss Hottie hears them coming long before they arrive. The thumping base from the rock music we blast while drinking beer, working on our bikes, and shootin’ the sh*t doesn’t sit too well with her either.
When my brothers get a look at her, I know I’m gonna have a hard time keeping them from makin’ a beeline straight for her door.

She fights me at every turn, and I know it’s not going to be easy.
I have a feeling she’s going to complicate everything.

When I see the bikes pull in across the street, I suddenly realize why this rental house was so cheap and the leasing agent so eager to unload it.
But when you’re running for your life, a dead-end street with few neighbors sounds perfect.

One look at the badass biker next door though, is all it takes for me to know I want nothing to do with trouble like him.
He’s the worst kind of dangerous—a man built like a Chippendale dancer who radiates confidence and fearlessness. I’m sure there’s not a situation he couldn’t handle or a room he wouldn’t own just by walking through the door.

With his looks, and the primal sexual vibe he exudes, I’m sure his bed is a revolving door of sexy young hotties eager to please him—women who haven’t had a child and lived through more sadness than one can bear.

He can intimidate me, but I’ll never let him see that when he looks at me with those killer eyes, he scares the crap out of me.
I’ve got secrets, and he wants to know every one of them.
I have a feeling he’s going to complicate everything.

Reader’s note: Nicole James is a Wall Street Journal and USA Today bestselling author. This is an enemies to lovers, bad-boy next-door romance with enough thrills and suspense to keep you turning the page.