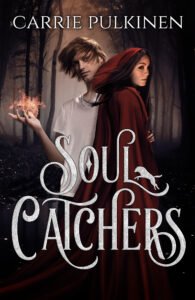 She’s not afraid of the Big Bad Wolf, until she’s running for her life.

Wren Lewis shouldn’t be alive. Magic is illegal, making her mere existence a crime, and if the government ever discovers the truth about her powers, she’ll be killed on the spot. But when she uses her magic to kill a wolf that’s attacking her mom, her abilities are exposed and the animal’s evil spirit possesses her. Unable to control the beast inside her, she flees the city in search of a cure for her curse.

Liam Stevens has one job: to keep the wolf contained. When it escapes and Wren shows up in the Oregon forest, possessed by its spirit, he makes it his mission to save her. After all, he’s the reason she’s cursed. Liam must help Wren master her magic before the wolf spirit overpowers her, consuming her human soul and turning her into a murderous monster permanently.