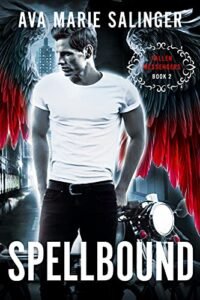 Can Cassius and Morgan overcome an elusive enemy and save a young girl’s life?

Eden Monroe has spent her entire existence believing she has no magic. Shunned by her mother Brianna and the magical bureau Hexa, she runs away from home when she is forced to embrace a future she never chose, only to fall into the hands of ghastly monsters from the Nine Hells. After being rescued by a mysterious Dryad with secrets of his own, Eden realizes there is more to her past and future than she could ever have imagined.

When San Francisco PD asks Argonaut to assist them in solving a series of strange bank robberies, Cassius Black and Morgan King uncover a disturbing plot that points to an unknown artifact hidden somewhere in the city. Their investigation soon has them crossing paths with a desperate Brianna, who seeks their help in finding her missing daughter. When the witch reveals the shocking circumstances surrounding her daughter’s birth as well as the deadly magic sealed inside the young girl’s body, the Argonaut agents realize their case is linked to Eden and the weapon of devastating power the bank robbers are after.

Can Cassius and Morgan defeat the malevolent organization behind it all and save Eden from her cursed fate? Or will the young girl suffer a destiny worse than death itself?

Spellbound is the second novel in the gay urban fantasy romance series Fallen Messengers. This is an MM paranormal adventure full of action, magic, snark, and a host of steamy angels and demons.